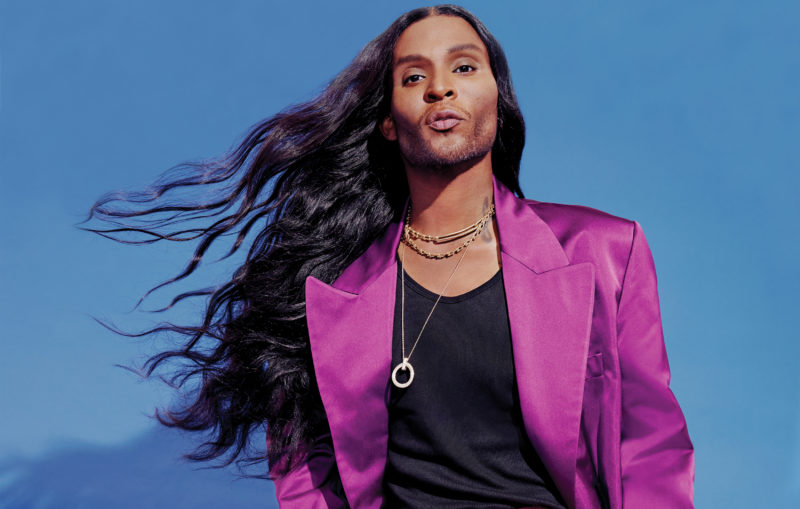 Law Roach is best known as Zendaya’s longtime stylist. Now, the fashionable friends are flipping the script as she dresses him in some of fall’s top looks.

“Gorgeous!” yells Zendaya from Law Roach’s phone. She’s video-calling her longtime stylist from Budapest while he’s on-set in downtown L.A. for his FASHION cover shoot. Positioned directly in the sunlight on a 30ºC day in August, he’s dressed in a sequined Gucci suit and trying not to sweat. “Turn up the music,” virtual Zendaya shouts as if anticipating his discomfort. With Beyoncé’s “Drunk in Love” now blaring in the background, the effect is instantaneous. Roach’s inner Sasha Fierce has entered the conversation, and he’s all attitude, joyfully dancing and singing to the music.

Zendaya was supposed to be here with us, grooving alongside Roach, but work called. As an ode to the Dune star’s FLARE December 2015 cover (also shot by Nino Muñoz) and FASHION Winter 2018 cover (the two brands merged in 2021), Roach and Zendaya decided to switch roles for the ultimate full-circle moment. “She saw the mood board, she chose the clothes and then we got to shoot with the same photographer, which is so cool,” says Roach on-set.

And the young star turned temporary stylist couldn’t have had a better teacher. Roach is the most in-demand “image architect” — a term he coined to describe his ever-evolving creative role — on the planet. Last year alone, he styled 32 different covers plus ad campaigns for Valentino and Bulgari, among others. Roach’s resumé also includes designer (in June, he collaborated with Hervé Léger for the Resort 2023 collection), contributing West Coast editor of British Vogue and judge on the hit HBO Max ballroom competition show, Legendary. And his current client list includes Celine Dion, Megan Thee Stallion, Bella Hadid, Halsey, Tom Holland, Kerry Washington and so many more. But his trendy transformation of Zendaya is what put him on the map.

As fashion folklore goes, Roach met a 14-year-old Zendaya at his former store, Deliciously Vintage, in 2011. Needing a dress for the premiere of the Justin Bieber: Never Say Never documentary, the Disney Channel star had come to Roach following a tip from a family friend. She left with a silver blazer, a patent green skirt and a mentor for life.

“All my girls have a certain ‘f*ck you’ mentality to them, but I don’t think Zendaya had it when we first met,” reveals Roach. “It’s one of the things that she credits me for giving her: the gift of not caring what people have to say about her.” Regardless, in those early days, Roach struggled to find designers who would dress the rising star. So, to get attention from the press, he would purposefully pull pieces that other celebrities had worn to ensure that Zendaya would appear in the now-extinct “who wore it best” tabloid column. (Spoiler alert: She always did!) And now that she’s reached icon status, Roach hasn’t forgotten the big brands who passed on her in the beginning. In 2018, he made headlines for saying that when a brand says no to Law Roach, it’s a no forever.

However, he does admit that he’s grown up a little since then and that the challenge pushed him as a stylist. “Because these luxury labels said no for so long, I was forced to find other ways to dress her,” he says. “And I think she’s proof that you don’t need to wear big brands to become a fashion girl. We did it on our own.”

Roach knows what it’s like to start from humble beginnings. Born and raised in the South Side of Chicago, he is the oldest of five siblings and describes his family as pretty unstable. As a result, he spent most of his time with his grandmother. “I didn’t grow up reading fashion magazines; my first runway show was actually at church,” he shares with a smile. “It was a visual smorgasbord of colours, fabrics, hats, gloves and heels, and I thought it was incredible.”

During trips to thrift stores with his grandma, Roach began collecting clothes and accessories in his car. One day, a friend opened Roach’s trunk and offered to buy some of his pieces, thus birthing Roach’s vintage boutique, which would later become a full bricks-and-mortar store in Chicago and a go-to destination for Kanye West in the late 2000s.

These days, you can see Roach’s love of vintage in everything he touches. One of the most used tools in his arsenal is sourcing iconic designer dresses from the past and giving them a modern twist. (Think Zendaya in old-school Valentino and Anya Taylor-Joy in Bob Mackie.) But first, the quintessential Law Roach process starts with a deep dive into his client’s fashion history. “I want to see everything they’ve ever worn,” he shares. “We all have our fashion mistakes, so I look at them and try to figure out where things went wrong.” Next comes the “energy meeting,” which involves an intimate conversation between him and the prospective patron to see if they have chemistry. Then comes the fun part: a giant rack of clothing. The star must pull pieces they love or hate from the lineup to help him better understand their own style process. “The biggest compliment I get is that all my clients look different,” reveals Roach. “They look like themselves — just a little more elevated.”

One look he’s still incredibly proud of is the white Vivienne Westwood gown Zendaya wore to her first Oscars, in 2015. “It was just so simple, but it started a real global conversation about what’s appropriate for Black women’s hair,” he shares, referring to her choice to pair the dress with dreadlocks.

Paying homage to Black fashion figures has been a common theme throughout Zendaya and Roach’s working relationship. Previous references include Ebony magazine co-founder Eunice Johnson, performer Josephine Baker, singer Aaliyah and, of course, Beyoncé. “More than anything, I am a storyteller,” says Roach. “Zendaya and I enjoy creating a character for her on the red carpet. We also believe that the only way to truly change someone’s life is financially. So if she wears a dress by a South African designer and it sells out, you’ve made all the difference.”

I ask him if this is what he thought success would look like: styling top stars, being a judge on a hit TV show and collaborating with renowned designers. He pauses to think. For someone whose visual and TV voice is quite loud (he’s considered the Simon Cowell of Legendary), Roach is surprisingly soft-spoken when it’s just you and him sitting on a leather couch in a green room. “When I came to L.A., I knew I wanted to be considered the best,” he begins. “But I’m also a firm believer that you don’t have to know the end goal. I figured out what I love to do, and I love being successful. I get the most joy from knowing I’m inspiring somebody else and showing people like me that it’s possible.”

Roach continues to be an advocate for diversity and inclusion in the industry. In 2020, he teamed up with Chicago-based non-profit Rebuild the Hood on The fLAWless Fundraiser to financially support Black-owned fashion and beauty businesses. But are things actually changing? Roach isn’t sure. “I think the industry is very performative,” he reflects.

“I’m trying to do my part to leave as many open windows, doors, garage doors and holes in the roof as possible so other people who look like me can have opportunities. What I have learned through this job is that people want to work with people who look like them.” (Read “white.”)

And while other stylists, like Jason Bolden and Wayman and Micah, may have broken through the barricade, Roach reiterates just how tough it truly is to do so. “Being a Black stylist is the same as being Black in any industry: You are born with a sense of burden and trauma,” he explains. “If you want to be respected, you have to be 10 times better than everyone else.”

What keeps Roach fighting is the drive within him. “Being complacent is never an option for me,” he says. “There’s always something else coming my way.” Like, say, a hit reality-TV series. Having premiered in 2020, HBO Max’s Legendary (available on Crave) is a voguing series in which dance teams (or “houses”) compete to win a cash prize and earn “legendary” status. Love him or hate him, after three seasons, nearly every viewer has an opinion of Roach’s blunt judging style. His quotes have inspired a magnitude of memes, tweets and gifs. My personal favourite is the time he sang the first few bars of “Amazing Grace” and told the dancer, “I just sang at your funeral; it’s over for y’all.”

However, Roach’s tendency to roast contestants doesn’t seem to translate into real life. He reveals that he thinks of “Legendary Law” as a persona. “When I sit in that chair, I just turn into somebody else,” he laughs. “I get to play a b*tch on TV, and I enjoy it. The comments come from a place of tough love. I’ll say shocking things, but then I’ll turn around and encourage, love and support you.”

So, who is Roach when he’s not causing a red-carpet revolution or tears on a TV show? “I’m quiet. I’m at home. I’m in bed,” he shares. “I love being by myself. It doesn’t take much to make me happy. Give me a Walmart sweatsuit and fuzzy socks and I’m good.”

Hours after our interview, Zendaya, Roach’s team and the crew are long gone. He’s changed out of his fancy finery and is back in the long denim coat, plastic slides and (yes!) fuzzy socks he arrived in. No longer in front of the camera, Roach effortlessly reverts to his behind-the-scenes role and asks to see all the shots from the day, eager to pick his favourites. With expert precision, he identifies why some photos work (he loves unexpected poses, movement and composition) and others don’t (it’s all about that attitude!), and it’s easy to see why he has transcended the title of “stylist.” He’s passionate, unapologetically himself and standing on his own — exactly as he should.

My Healthy Meal Prep Cookbook Trailer | a little behind the scenes!
FULL DAY OF EATING- HEALTHY MEALS, HOTWORX WORKOUT & NEW ACTIVEWEAR!
Excellence in Indigenous Fashion Was on Display at the Santa Fe Indian Market
Gentle Morning Yoga For Infertility and Conceiving
Keke Palmer Reveals the Best Sex Advice She Ever Received: “Start With Pleasing Yourself”