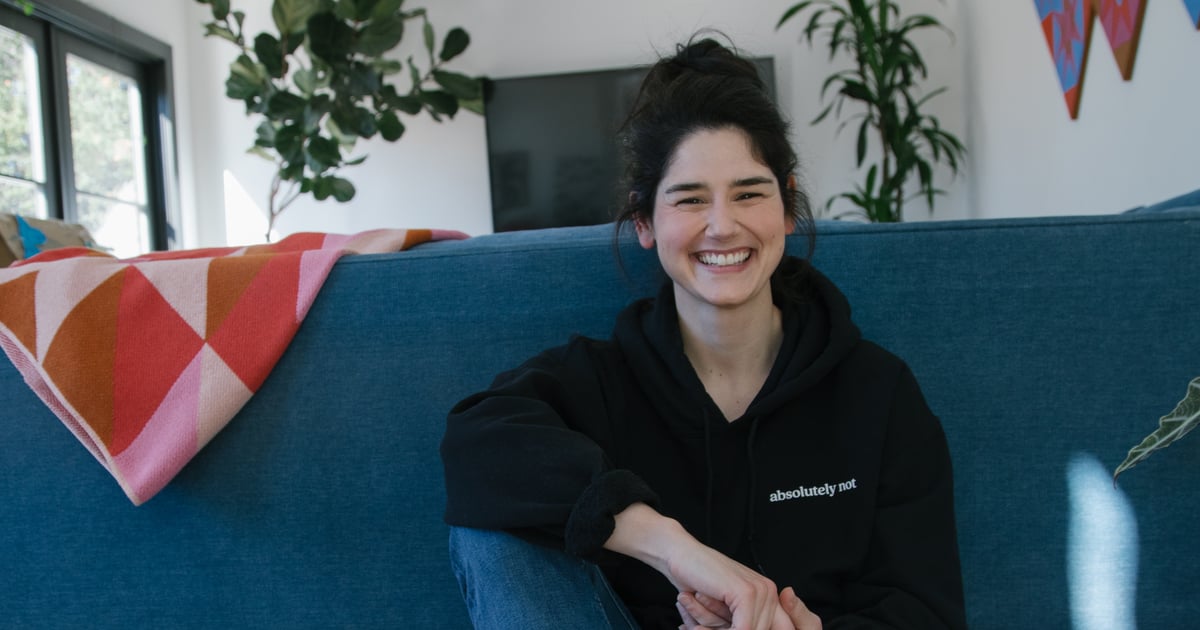 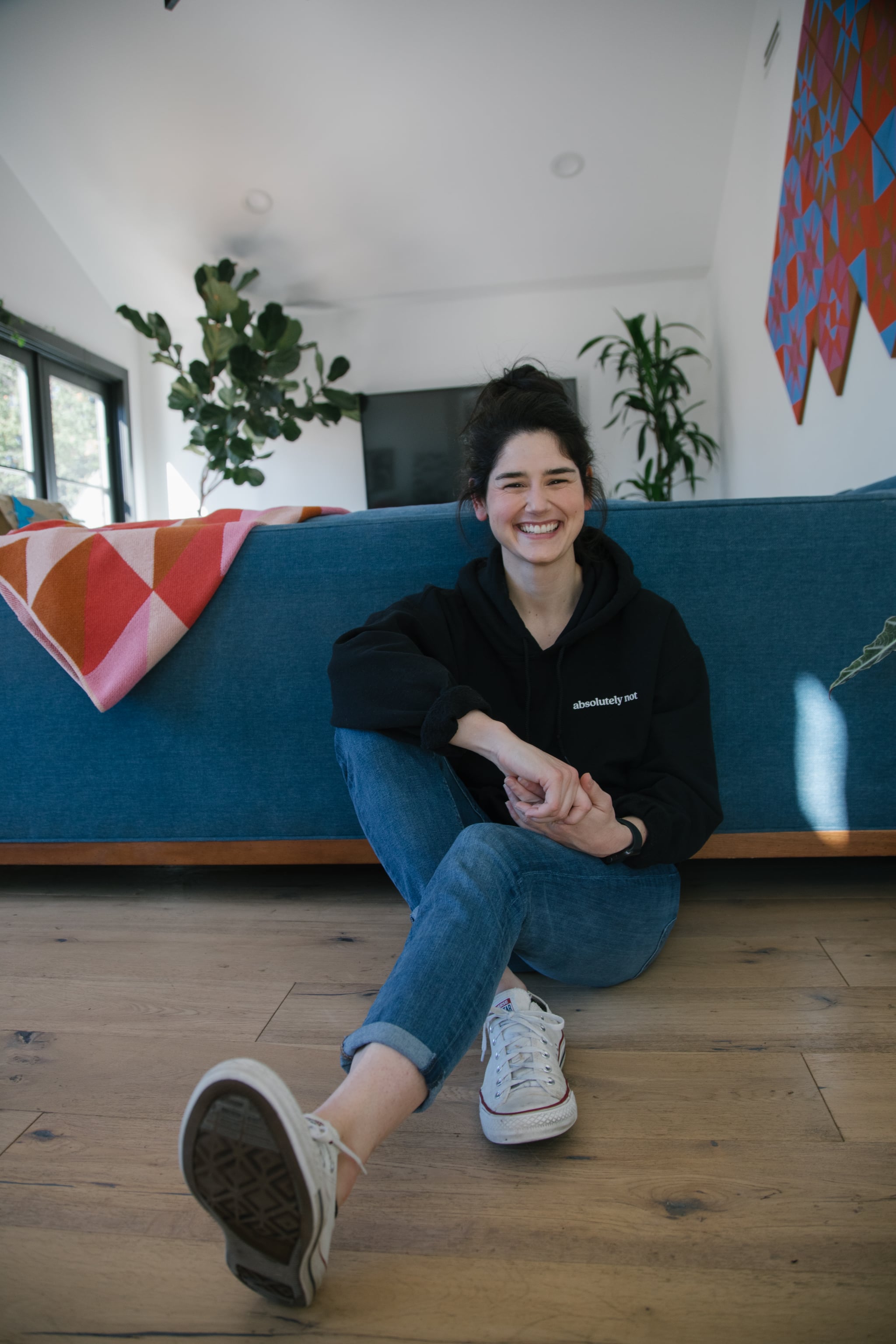 Sometimes, Elyse Myers just needs to take a break from her face. Not in a bad way, but when you spend hours filming and editing videos of yourself, like the comedian does for her TikTok account of 5.6 million followers, staring at your face for that long can start to feel “really unnatural,” Myers tells POPSUGAR. “For a human being to have that much information about what they look like from every angle . . . your brain’s not meant for it!”

At this point, Myers’s face is fairly recognizable to anyone who spends time on TikTok. You might have seen her video recounting her worst date of all time (she bought the guy 100 tacos, which they ate in silence at his kitchen table) or the one where she met her childhood crush, Lance Bass. The stories she shares are quirky, awkward, hilarious, and designed to make you laugh out loud while simultaneously cringing from secondhand embarrassment. But it’s Myers’s delivery that really sells it: earnest, deadpan, wide eyes locked on the camera. Many videos are fully face-to-camera with minimal cuts, and the combination of filming and editing equates to hours of dissecting her own appearance.

For her own mental health, the 29-year-old comedian has started instituting “face breaks” — i.e., making videos that don’t feature her image — when it gets to be too much. That’s also why Myers doesn’t venture into the wilderness of her comment section too often. Generally, she says, the positive comments tend to float to the top, so that’s where she stays. “That’s the community that loves you, that supports you, that wants to build you up,” she explains. “As long as you don’t go shopping for pain down in the depths of your comments, you’ll be OK.”

Finding TikTok in a “Low Season”

In her unexpected new life as a social media star, Myers has gotten pretty good at creating boundaries for the sake of her mental health. She originally got into TikTok after the birth of her son when, as Myers describes it, she was going through a “low season” with her mental health.

“I was kind of finding a way to get back to myself, mentally,” she says. Unable to get back into her “creative rhythm” through her usual outlets like creative writing and songwriting, Myers started making videos in the morning before starting her day job as a web developer. Almost immediately, she found an audience who resonated with her funny, authentic storytelling. Her goal: to make videos for people like her, stuck in a tough mental situation and needing a bright spot in their day. “It wasn’t heavy; it was just a silly story that allowed them to . . . have a laugh and move on,” she says. “Opening my life up in that way healed me out of that season but also . . . brought a million other people along with me in a way that I never could’ve really imagined when I started making the videos.”

Now that she’s a full-time comedian on TikTok, mental health has continued to be a focal point for Myers’s content. Besides entertaining people, a constant theme in Myers’s videos is mental health, much of it stemming from her own journey with anxiety and depression.

As a child, Myers says, she struggled to regulate her emotions and feel “baseline normal” compared to the kids around her. “I would get really anxious, and then I would have days when I just didn’t want to go to school,” she says. It felt like she was tired, Myers remembers, but it clearly wasn’t just fatigue.

Myers’s family connected her with mental health professionals, and at a young age, she learned she was struggling with anxiety and depression. As she got older, she started to learn which situations trigger it: being around large groups of people, which made her feel like she couldn’t speak up or express herself; and working herself into burnout by not prioritizing rest.

In January, Myers became a full-time content creator, which comes with its own mental health challenges. Public speaking can trigger her anxiety, and yet she now creates videos for a huge audience, which often number in the millions. How does she make it work? “It’s easier to tell a story and post it and have it be seen by people because I’m not in front of them,” Myers explains. “Honestly, it’s like the best-case scenario for somebody who struggles with nerves in front of people. Creating content online is the easiest way to do it. You can send that information out into the world without ever having to really interact with people’s faces and eyeballs.”

She’s also realized that she doesn’t have to feel 100 percent confident and fearless to do scary things, like jumping headfirst into a new career. “I just kind of figured out I could do it scared,” she says. “I adopted that principle really early on in life where, like, you’re gonna be nervous while you’re doing it, but you’re just gonna do it scared, and turns out, it still works.”

Learning to Love Her Body

Entering a profession that’s so image focused also presents another kind of challenge. Myers has been open about her journey with body image on her channels, and it’s something she says she was conscious of at an early age. “I was just very aware of how I looked and what that meant for me,” she says. “I was aware of the size of my body before I ever learned how to love it.”

She eventually sought treatment and says the journey toward body acceptance really progressed when she became an adult. “I’ve never been in a better place than I am right now,” Myers says.

That’s not to say that maintaining her positive mindset around body image is easy, Myers says. It helps, though, that her overall community is extremely kind. “It’s just shocking,” she says. “People are just so kind.”

As for the uncalled-for comments about her appearance and body, Myers says, “I have to let myself have some space from people’s opinions. I mean, I could confirm every fear I have by just reading through my comments, if I really wanted to. But I just don’t have the time for that. I won’t be effective as a content creator or as a person if I just fill my brain with that much information.”

Face breaks, avoiding negative comments, “doing it scared,” logging off at 4:30 p.m. every day to do bath time with her son — talking with Myers is like getting a toolkit for maintaining mental health when you’re perpetually online. These boundaries, tools, and coping mechanisms are all designed to help her avoid burnout and maintain her passion for what she does, because she says she loves her job. “I want to do this forever,” she says.

Maybe not necessarily making TikTok videos forever — although Myers certainly found her gift for storytelling on that platform — but running a business, writing, and being a creative professional. Myers says she’s working on a TV show and a book, and her new podcast with Lemonada Media and Powderkeg Media, “Funny Cuz It’s True,” launched today. In it, Myers sits down with comedians, pop culture icons, and “just people I think are really funny” to have conversations about awkward things they’ve done that, for one reason or another, they can’t stop reliving. It’s a natural fit, since that’s a source of inspiration Myers has tapped for her own videos. “It just makes these people who I’m talking to, who otherwise would feel very unapproachable, very approachable and very normal,” she says. “I think that’s really beautiful, and I think that we need to have more of that from people in the spotlight.”

Myers hopes to make mental health just as approachable by seamlessly working it into every conversation and video. In that way, she hopes to make mental health a normal thing to talk about on a daily basis. “I think the more that we can just weave it into our normal life, the easier it will be . . . to open up about it,” she says. “I just want to talk about it in a way that feels so not-a-big-deal that it’s like breathing.”

Healthy Lunchables School Lunch – Weelicious
packing lunch for my kids tiktok competition ✨ health food # 1
Health Benefits of Yoga: 10+ Benefits Showing Why Yoga is Good For You
This Bodyweight Move Is the Perfect Combo of Cardio and Core Work
Post Workout Meals | What To Eat After Workout