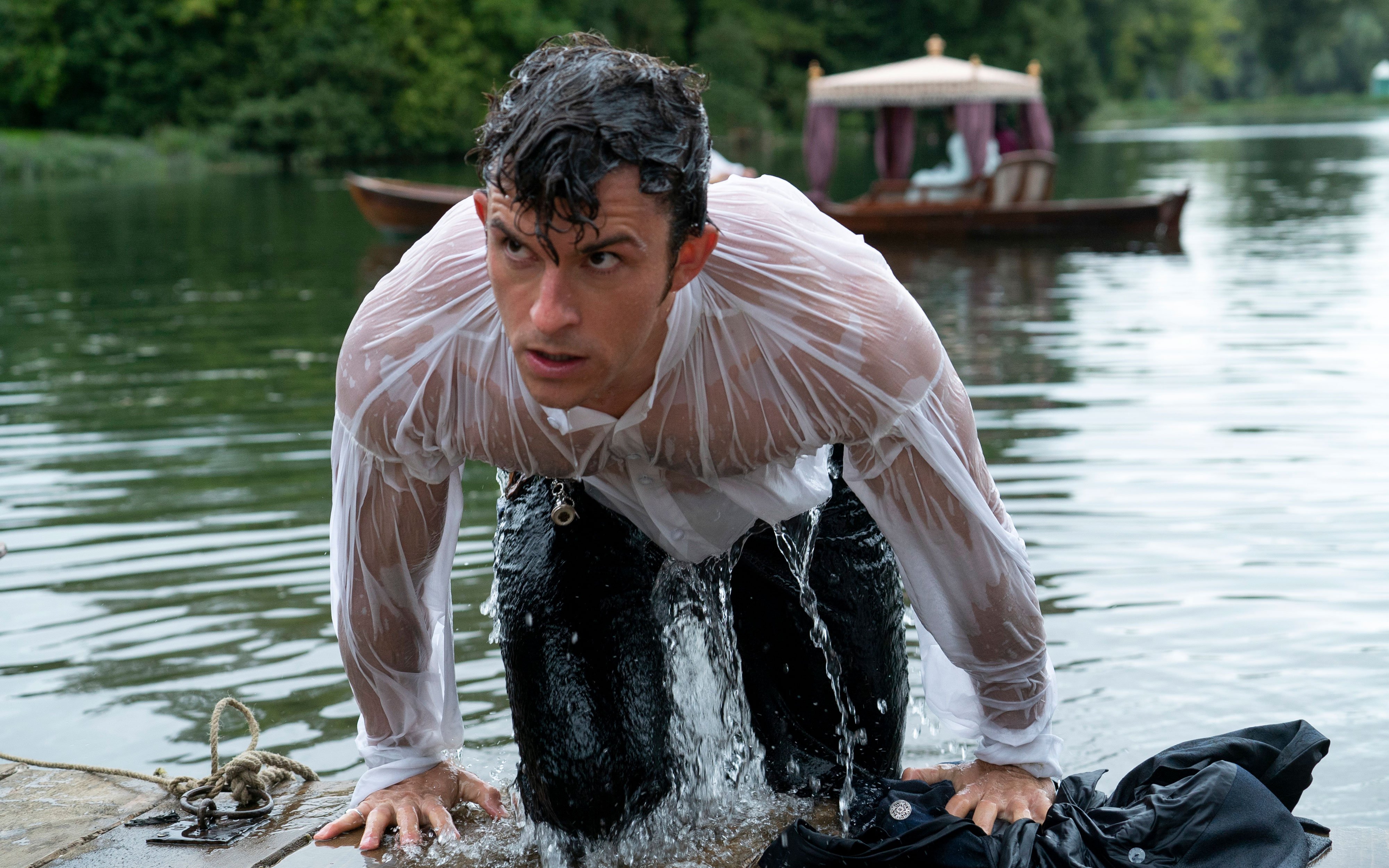 Sound familiar? If you’ve spent the last few days binge-watching Bridgerton season two, then it should. In episode five, there’s a pivotal swoon-worthy moment in a show built upon swoon-worthy moments where Anthony Bridgerton (Jonathan Bailey) takes an accidental swim while helping Kate Sharma (Simone Ashley) out of a boat. It’s cute, full of chemistry and just a little risqué, meaning it perfectly encapsulates the Netflix phenomenon. But is it unique? Not so much.

If you’re an avid period drama aficionado like myself, you’ve probably seen more suitors in wet white shirts than you can count: Greg Wise in 1995’s Sense & Sensibility, Dan Stevens in 2008’s Sense & Sensibility, Rupert Friend in Young Victoria, Toby Stephens in Jane Eyre, Aidan Turner in Poldark, Theo James in Sanditon (a must-see if you’re already looking for something to tide you over until Bridgerton season three) and of course, the man that started it all, Colin Firth in Pride & Prejudice.

Released almost thirty years ago, the 1995 adaptation of Pride & Prejudice from the BBC and Andrew Davies caused wet shirt (and Colin Firth) hysteria. If you don’t have the scene memorized like myself, Firth’s Mr. Darcy decides to go for a swim on his estate after a quick fencing lesson. On the walk back to his mansion, he runs into Elizabeth Bennet while only wearing a wet shirt and trousers. Although the now-classic montage wasn’t in the original Jane Austen novel, it quickly became a fan favourite (for obvious reasons) and has since garnered a legacy rivaling the author herself.

The Guardian has called it “one of the most unforgettable moments in British TV history.” The Smithsonian has said, “it’s a costume that launched an entire generation of Austen lovers.” And the New York Times dubbed the shirt in question a “celebrity object” if such a thing were to exist. The scene has spurred countless recreations (See Benedict Cumberbatch’s 2014 charity photoshoot). The shirt has been featured in a myriad of museums (it’s currently sitting in Austen’s house in England). The whole production even inspired a 12-foot tall statue of Firth in London. And here we are in 2022, still referencing it today.

So the question has to be asked: besides just being good ol’ fashioned eye candy, why are there so many men in wet shirts in period dramas?

The most basic explanation is that men simply wore a lot of white shirts during the Regency-period. Dress historian Dr. Alanna McKnight notes that “men’s dress shirts were also used as their nightshirts in the early 19th century, [so] it would’ve been considered unusual for a man to remove his shirt for anything other than laundering.” This would explain why Michael Fassbender’s dreamy Mr. Rochester is wearing one in Jane Eyre after being awoken by a fire (I’m sorry to say the shirt wasn’t wet like in the 2006 mini-series), and Firth’s Mr. Darcy decides to go swimming fully clothed.

There’s also a false assumption made by modern film and TV producers that women of the past were sexually repressed. Hence the not-quite-nude wet shirt’s popularity. “The shirt, albeit wet and clingy, means the man is still dressed, and the chaste woman remains free of the sin of gazing upon the male figure.”

McKnight also says the wet shirt is used for character development. As seen in Bridgerton, Anthony’s fall into the lake could (very literally) represent the fact that he is falling in love with Kate. His costume, designed by Ellen Mirojnick, takes this idea a step further. On dry land, he wears a rigid and restrictive Regency-era suit —symbolizing his tough, emotionless exterior — but once he’s in the water, his jacket and collar disappear, and he’s left sporting a softer and more revealing ensemble. Coincidence? I think not.

But perhaps the best explanation for all the men wearing wet white shirts in period dramas is the female gaze. Think about it — most of the productions are based on books written by women for women (Jane Austen, Charlotte Brontë, Bridgerton’s Julia Quinn etc.), and the story is told from a female perspective. The heroines have depth and agency and are not merely objects of desire, as is often the case with the male gaze. Because of this, there’s a role reversal, and the male leads tend to take on a more sexualized role.

And if we’re being honest, cinema has had a long and problematic history with the male gaze and female nudity. Whether it’s done tastefully or not, the ratio of naked women to naked men on screen is highly unbalanced. Think of these scenes in period dramas as a turning of the tables for the post-“wet t-shirt contest” era.

But McKnight challenges the assumption that women prefer to consume media where nudity is thinly veiled behind a damp button-down. “[Some media creators believe] that women have different responses to nudity than men,” which McKnight says is attributed to outdated gender roles and research. “Filmmakers view women through this archaic lens, and when this is compounded with historical drama, there are two layers of assumed sexual fragility.”

Luckily, the success of shows like Sanditon, Outlander and Bridgerton proves the exact opposite. Bridgerton’s real-life queen Shonda Rhimes and showrunner Chris Van Dusen are clearly not afraid of a bit of spice (how can anyone forget Daphne and Simon’s honeymoon from season one?), but they also seem to recognize that period dramas have a specific formula for success, and that formula includes a not-so naked male torso. Anthony’s Mr. Darcy moment can be both a nod to the original trope while simultaneously parodying it. It can be a way to move the plot forward and an excellent example of strategic costume design. But it can also just be a great excuse to see a hunky actor basically shirtless.

Ultimately, the difference between a good adaptation and a great adaptation isn’t about how wet the suitor’s shirt is — it’s about the strength and likeability of the female lead, and finding the right chemistry to make the slow burn romance worth the wait. These films and TV shows provide escapism and bit of respite from the world of hookup culture and feed the souls of hopeless romantics who like their love interests drenched, both literally and figuratively, in love. Now bring on the next wet shirt!