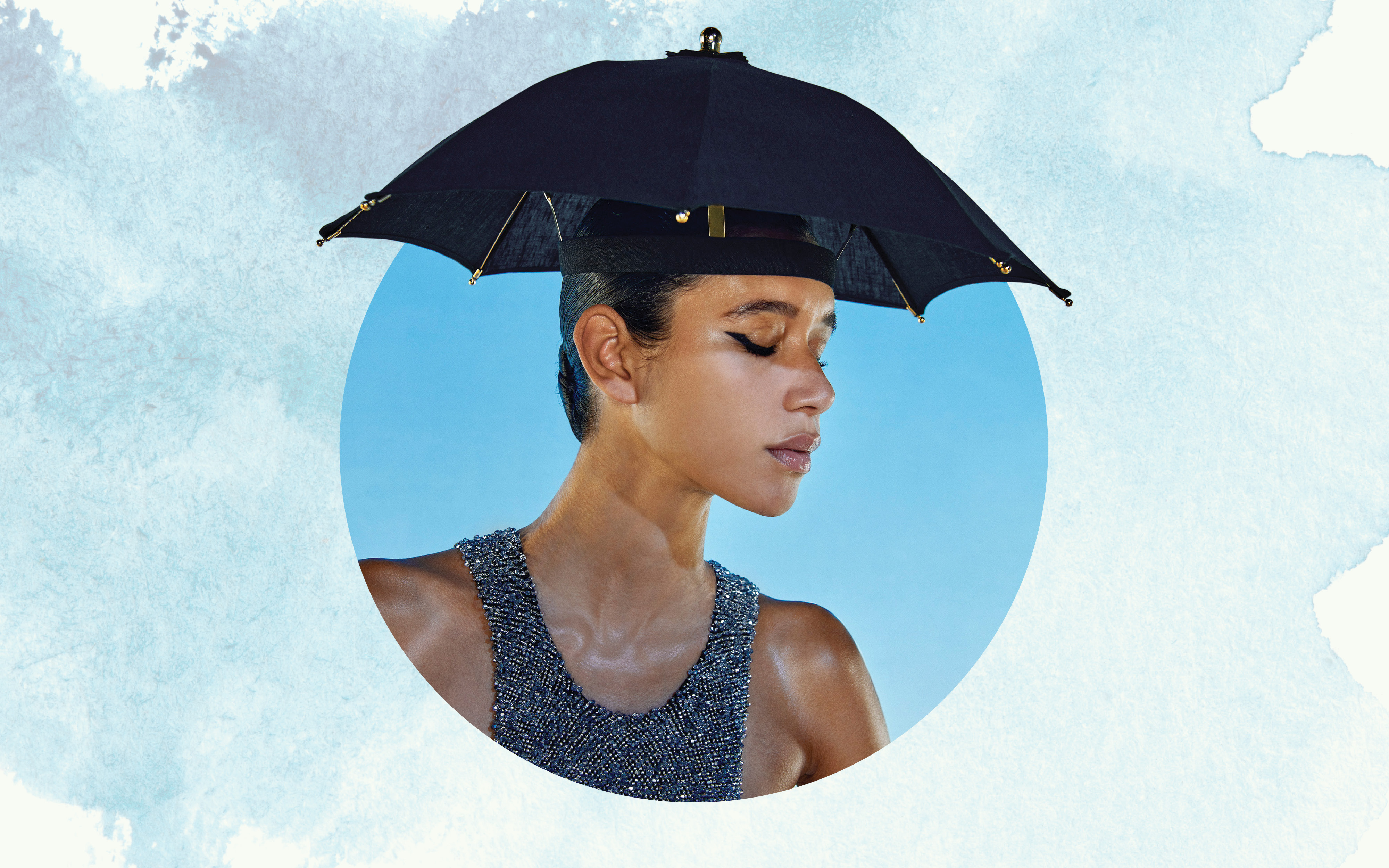 Designers are doing away with fashion’s affinity for dour demeanours in favour of comical creations for spring.

For the third look of her Spring 2022 show, Puppets and Puppets creative director Carly Mark sent headwear resembling giant blocks of Emmenthal and Parmesan down the runway, and, no, this was not an early April Fool’s joke. A proud Midwesterner (born in Detroit), the designer told Vogue she sought to make “her own artisanal Green Bay Packers cheesehead.” But the assortment that followed on the catwalk perhaps warrants more of a tacky tablescape comparison, as models earnestly sported tinsel scarves, fruitpatterned shirts, bags decorated with croissants and dresses accentuated with tea saucers.

While the obvious inclination is to label the designer a fashionable oddball or outlier, this kitschy foray into fromage wasn’t the strangest thing on the runways; comical couture dominated the spring season. Fashion, it would seem, has a new sense of humour.

For many of Mark’s campy compadres, this wasn’t a stretch and led to bigger and bolder creations. Satirical label Moschino took its garments back to kindergarten, with juvenile prints and plush “lamb” handbags. Schiaparelli floated umbrella hats and inflatable parkas. Loewe’s exquisitely eclectic heels took inspiration from birthday candles and bars of soap. And Comme des Garçons did its best Zoolander “Derelicte” impression, with couture crafted from trash bags.

For other less-comically-inclined designers, this trend injected new energy and dynamism into their designs. Burberry paired tan trench coats with oversized elf ears. Models at MM6 by Maison Martin Margiela donned literal checkerboards and spiderwebs. Even Givenchy, known for its urban elegance, presented handbags that were part jack-o’-lantern, part basketball.

Most surprising was the emergence of a new supermodel family: the Simpsons. Thanks to creative director Demna Gvasalia of Balenciaga, Springfield took over Paris Fashion Week. The result was a highly entertaining series of misadventures as the world’s favourite cartoon family goofed their way through French couture. Highlights included Marge in a green pagoda-shouldered gown getting stuck in a doorway, Homer nearly fainting after seeing the whopping price tag of a “Balenciagaga” creation, Sideshow Bob’s futile attempt to fit his clown feet into the brand’s Speed sneakers and an animated yet still sombre Anna Wintour.

This wink at fashion’s affinity for dour demeanours is fitting, considering the industry’s comically deficient reputation. Hayley Elsaesser — a Toronto-based designer renowned for her playful patterns and cheeky aesthetic — even went so far as to cite this perception in her brand’s origin story. “Growing up, I was always a practical joker and loved wearing crazy outfits,” she says over the phone. “But when I started studying fashion in university, I realized that the industry feels the need to portray this very specific serious image. So I was like, ‘F that! I’m going to be the antithesis and just have fun and do what I want.’”

“When you laugh heartily, you can relax and forget the moment you’re in. It’s an escape.”

Barbara Atkin, a global trend forecaster and lifestyle branding consultant, says that this reputation originates from the days before social media, when the small group of editors and buyers who attended the shows were tasked with dictating what “everyone was going to wear for that season.” She particularly emphasizes the amount of responsibility and bottom-line revenue involved. “I mean, it’s a giant industry, so when that much money is at stake, it becomes serious business,” she says via video chat. She also debunks the myth that humour and fashion are mutually exclusive, despite the economics. “There have always been moments of levity,” she adds. Case in point: Elsa Schiaparelli’s lobster dress — made famous by Mrs. Wallis Simpson, Duchess of Windsor — which was created in 1937 during the Great Depression. Jonathan Walford, co-founder and curatorial director of the Fashion History Museum in Cambridge, Ont., explains that when Schiaparelli began her ascent up the style ladder, her aesthetic was initially quite architectural. It wasn’t until the latter half of the era that satire started playing such a pivotal role in her work. “Somewhere in the mid-’30s, Elsa lightened up and began experimenting with prints and surrealism — she seemed to be having more fun,” he reveals.

Historically, adds Walford, periods of great distress can often lead to times of great jocularity. (Think the Roaring Twenties after World War I and the Swinging Sixties after World War II.) Of course, when life gets tough, joy can easily get lost and the fight to remain optimistic can feel endless. So when the proverbial black cloud is lifted, society has a communal desire to make up for lost time and lost happiness. “Fashion is a reflection of the moment; it’s a mirror of what’s going on,” notes Atkin. “It’s a cliché, but it’s true: Laughter is the best medicine. And when you laugh heartily, you can relax and forget the moment you’re in. It’s an escape.”

Such is what’s happening now. Given the state of the world over the past two years, even writing the word “fun” feels slightly rebellious. But shoppers and designers alike have seemingly gained a new appreciation for comedy, prompting many to embrace more colour, whimsy and (now) wit in their wardrobes.

“We used to be filled with fear and isolation,” says Atkin. “I think COVID-19 was the last straw — it opened up the gates where everyone said ‘Let’s stop being so serious.’ I mean, we still have a lot of serious things to do — designers aren’t neglecting that — but let’s find some time to laugh together.”

Elsaesser also points to the psychological effect of fashion. “Clothing has a unique power to affect your mood and make you feel better,” she says. “So when you put on something fun and colourful, it puts you in the frame of mind to have a positive, fun day.”

Humour could even be considered a sustainable tool, directing consumers to shop for more investment pieces. “I always used to say that if you’re going to be a good conscious consumer, you have to stop shopping altogether,” says Atkin. “But we know this is unrealistic because we are consumers; therefore, we consume. So what are you actually going to buy? Things that you don’t already own that make you feel good and you’re going to want to keep forever. When you’re buying something with a sense of humour, it’s a work of art. It’s not disposable; rather, it adds longevity to the garment.”

Whether comical couture is an environmental strategy or a bid for attention has yet to be seen, but chances are it’s most likely the latter. Viral social media moments have become fashion’s most coveted currency, as designers fight for the spotlight among Instagram influencers and TikTok creators. “It’s a way to maintain the brand’s relevancy,” says Elsaesser. “Luxury customers are getting older; to stay current, designers have to appeal to younger demographics — it’s no longer a given that people are going to pay attention to you just because you’re a big name.” She points to Burberry’s use of elf ears as a perfect example of this, which directly played into the “Cottagecore” microtrend (think Anne of Green Gables meets fairy princesses) that consumed TikTok in 2021.

Even if you’re not an attention seeker, there is beauty in this unapologetically joyful fashion cleanse. The new landscape is all about connecting the dots, online and offline, between pop culture, clothing and communities and the healing power of laughter. Like with sporting a cheesehead at a football game, we’re all in on the joke.