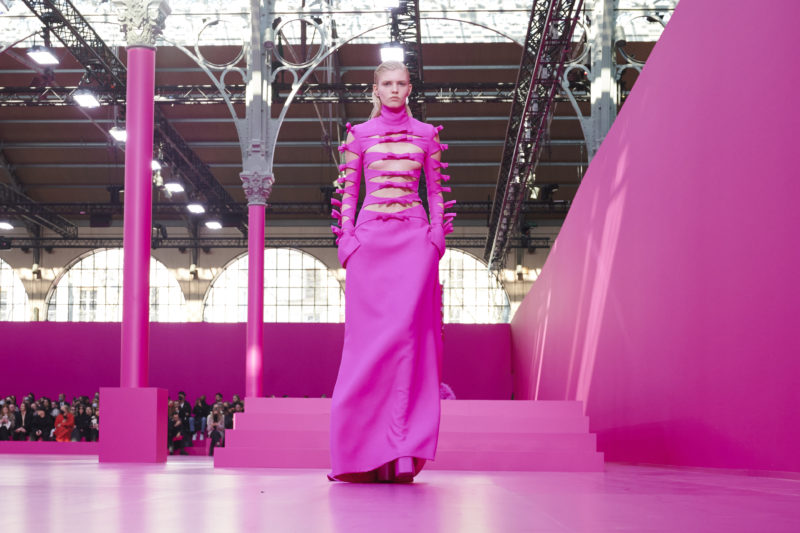 Plus Balenciaga’s fashionable snow globe and Chanel’s ode to tweed.

There is still just something about Paris. Despite all the cities, all the content creators and all the social media platforms, Paris Fashion Week is still the crown jewel of them all. It’s where the industry’s top talent comes to present the best of the best, and fashion’s glitterati (and we mean REAL glitterati, not just someone with a cute outfit and an iPhone) gets a sneak peek into what we will be wearing in a few months.

Fashion reflects the times, and that was never more apparent than in the French city this past week. As the war in Ukraine continues, we saw many designers like Balmain, Balenciaga and Dior make references to the post-apocalypse with armour-like looks and yeti-core. Then at Saint Laurent and Givenchy, Fall 2022’s biggest trend, bold-shouldered suiting, continued to defy the pandemic’s preference for loungewear. But despite all the horror and hardships that the world currently faces, we also saw a lot of hope and optimism, especially at vibrant Valentino.

With that in mind, here are our top moments from Paris Fashion Week 2022 and be sure to check out FASHION‘s TikTok for our top trends of the season.

Balenciaga Creative Director Demna first planned the simulated blizzard seen at his presentation as a statement on climate change. But as Russia’s attack on Ukraine intensified through Paris Fashion Week 2022, the Georgian designer, himself a refugee in the 1990s, stood in support of those fleeing the European country. A note written by Demna was left on each seat, with a classic Ukrainian poem included, and guests were given blue and yellow T-shirts to symbolize the country’s flag. “The war in Ukraine has triggered the pain of a past trauma I have carried in me since 1993, when the same thing happened in my country and I became a forever refugee,” he wrote in the note. On the runway, models trudged through the snowstorm in dark hues and capes, some carrying trash bags and others wrapped in just a blanket, grounding the week’s events in a sombre aura.

With files from Natalie Michie

Chanel: How much is too much tweed?

Chanel and tweed are like peanut butter and jelly — while you can have them separately, they are much, much better together. For the luxury French house’s Fall 2022 presentation, creative director Virginie Viard was so tweed-obsessed that she even covered the venue in the fabric. Inspired by a tweed variety specific to Scotland (one of Gabrielle Chanel’s favourite stomping grounds), models were immersed in the material and paired their designer garb with the chicest of rainboots.

Dior: The women are watching

For Dior’s Fall/Winter 2022 collection, Maria Grazia Chiuri combined technical innovation with the house’s rich heritage. Exhibit A: The luminescent model that opened the collection. Created in collaboration with the D-Air Lab, the fluorescent green bodysuit is designed to regulate the wearer’s temperature in extreme conditions. But the presentation’s meaning was deeper than that of futuristic fantasies. On the walls, Chiuri hung pieces from artist Mariella Bettineschi’s The Next Era collection, featuring portraits of women from the 16th and 19th centuries with their eyes sliced and stacked. The haunting “jellyfish eyes,” per Dior, exemplified the agency found in the female gaze, while the garments’ modernization proved Chiuri was seeing into the future.

Loewe: Are those even shoes?!

When Loewe launched its egg-inspired sandals last season, we thought we had seen it all, but apparently, we had spoken too soon. This fall, expect some pretty outrageous footwear by the French brand inspired by balloons, drawstring bags and animal-like hooves. While these three things feel very separate, creative director Jonathan Anderson used words like “primal” and “irrational” to describe the overarching theme. Mission accomplished!

Louis Vuitton: All the star power

If there’s one thing we can all agree on, it’s the power of celebrity in fashion. Louis Vuitton understands this, and it’s why the French label’s guest list was like the little black book of Hollywood. Emma Stone, Jennifer Connolly, Julianne Moore, Sophie Turner and Joe Jonas, Chloë Grace Moretz, Cynthia Erivo, Venus Williams…Need we go on? Designer Nicolas Ghesquière even tapped model-turned-actor HoYeon Jung (Squid Game) to open the collection. Dedicated to youth “in all its vivid romanticism,” it’s safe to say Louis Vuitton’s Fall/Winter collection gave us a heavy dose of star-powered nostalgia.

Just call designer Miuccia Prada “Doc” because she transported us back to the future for Miu Miu’s Fall 2022 collection. After the brand’s last collection of mini skirts went viral, TikTok influencers and other fashion glitterati were eagerly awaiting another trip down Y2K memory lane, and Prada’s younger sister didn’t disappoint. While this offering is more athletic than academic, we expect to see these micro-mini tennis skirts and preppy polos everywhere in the next few months.

Even though he’s gone, Virgil Abloh is still pushing boundaries. For Off-White’s Fall 2022 show, the late designer and his team presented not one but two collections. Designed by Abloh but executed by his collaborators, the first was a ride on “Spaceship Earth” and featured many utilitarian silhouettes. But the true out-of-this-world moment came when the brand debuted its streetwear take on haute couture. Think hoodies with ballgowns, sneakers with puff sleeves and t-shirts with tulle.

As ‘90s europop group Aqua once instructed, feel the glamour in pink! For his presentation, Valentino Creative Director Pierpaolo Piccioli collaborated with the Pantone Color Institute to create a hue exclusive to the Italian fashion house. The Valentino Pink PP collection consisted almost entirely of the colour, with some all-black and all-white intermissions. Models walking the so-called “pink out” wore short hemlines, cinched waists, bows, ruffles and sky high platforms. With some imagination, life really is your creation!