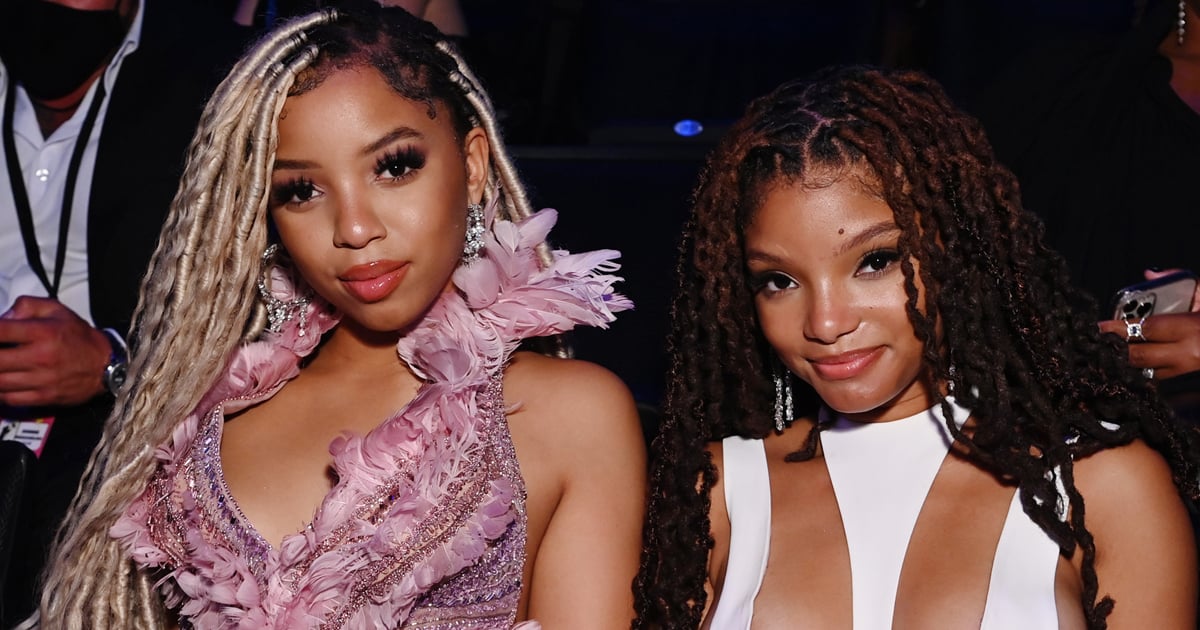 For Chloë and Halle Bailey, having a sister means access to unconditional love and support. As 20-something-year-old music idols with three Grammy nominations and two NAACP Image Awards under their belts, Chloë and Halle are familiar with fame, success, and the emotional and mental toll that comes with being young Black women in the entertainment industry. But between shooting films, scheduling tours, and working on new albums, the sisters have managed to prioritize two lifelong projects in the making: their self-love journeys.

“I have these days where I feel really good and self-confident, and I have other days where I don’t, and I think that’s just the beauty of being human.”

“I’m learning that [my journey] is a work in progress, and it’s not as easy as the media and everyone online tries to make it seem. It’s up and down for sure,” Chloë tells POPSUGAR. “It’s definitely a journey, but I’m learning it’s OK to not be OK, and that is just as much a part of the journey as telling yourself that you love yourself. It’s OK that we’re not always positive all the time, and it’s OK to not put pressure on ourselves to be [positive], because that in itself is contradicting everything. If we’re telling ourselves that we’re perfect the way we are, we can’t beat ourselves up for being flawed.”

For Halle, the process of cultivating self-love is “everlasting.” “I have these days where I feel really good and self-confident, and I have other days where I don’t, and I think that’s just the beauty of being human,” she says, adding that she’s grateful for the small things in life, like the food that she eats and the clothes on her back. “I get to use my voice for good and see and do the things that I love — and just focus on all the small things that I’m grateful for.”

From covering songs on YouTube in middle school to becoming household names, Chloë and Halle know what it takes to make their voices heard. During Women’s History Month, the sisters partnered with Neutrogena Studios as part of its First Frame Program, powered by Ghetto Film School, to elevate filmmakers of diverse backgrounds whose stories celebrate healthy skin. Through the program, Chloë and Halle mentored two scholarship recipients, Kyra Peters and Sarah Jean Williams, who received $25,000 each and full-time coaching for six months to create their powerful short films centered around self-acceptance.

“Sometimes it’s trials and triumphs that you go through in order to get to the ending where you truly feel good about yourself and who you are in your skin.”

“When it comes to Sarah Jean and Kyra, we were so touched by their stories because we really felt that [their films] told the story so clearly of finding the power and freedom in your skin and what that journey looks like,” Halle says. “Sometimes it’s a winding road. Sometimes it’s trials and triumphs that you go through in order to get to the ending where you truly feel good about yourself and who you are in your skin. We definitely feel like they hit the nail on the head.”

Williams says, “I respect and look up to what Chloë and Halle do in their music as artists and how they serve as role models to women of color, so it was exciting to have them provide creative input throughout the process of making my film. They also shared how learning to say ‘no’ can transform the industry for the better for other women of color, how using your voice can help shape the future, and how it’s necessary to use your voice when you can.”

As fellow artists and creators, Chloë and Halle were happy to support young Black creatives on the rise. Peters’s film, “En Avant,” is about a Black ballerina’s “struggle with self-acceptance as she faces racism in a white-dominated art form.” Williams’s animated short, “If My Voice Rang Louder Than My Skin,” tells the story of a boy who wishes for a world where his skin color didn’t have such a huge impact on his daily life. In an industry where BIPOC make up just 25.4 percent of top filmmakers, Peters and Williams’s films are pivotal in spreading messages of self-love and diversifying the entertainment world — causes Chloë and Halle are proud to support.

Most notably, each film starts out in black and white before bursting into color near the conclusion, a stylistic choice that Chloë says was key to delivering the message of each film. “Some people in the world only see in black and white,” she says. “[But] it’s really important to see everything painted in everyone’s perspective, and not everyone has it as easy as others. So I thought that [motif] told both stories so beautifully, and I love how the color also represented freedom and finally being able to speak up, to finally accept ourselves and who we are despite what the world tries to tell us. I think it was so instrumental in both stories.”

On Finding Self-Love in Each Other

Amid overwhelming success, Chloë and Halle’s self-acceptance journeys continue to shape themselves. Still, the sisters are always secure in the fact that they have each other to lean on through the good times and the bad. “I’m so honored to have somebody like my sister who I can watch and learn from so much and have her to encourage me during those times when I don’t feel as amazing as I do on other days,” Halle says.

“When I am too weak to do it myself, I call my sister or I call my godmom or my little brother and they’re there to always pick up the pieces for me.”

Chloë adds that the relationship she shares with her family is irreplaceable and something she’s grateful for every day. “Whenever I’m down, I’ll put on some good television to distract my mind, [get] some good food, and I’m good for the moment,” she says. “But definitely [build a good] support system, because when I am too weak to do it myself, I call my sister or I call my godmom or my little brother, and they’re there to always pick up the pieces for me. And then I’m back to being able to do it on my own.”

Watch “En Avant” and “If My Voice Rang Louder Than My Skin” here.

How I Lose Fat & Keep it Off: Meals, Workouts + Everything Else
A Dangerous Fungal Infection Is Spreading Across the US. How Concerned Should We Be?
Easy Yoga Postures for Menstrual Pain | Dr. Hansaji Yogendra
Cheap and Healthy Meals That Got Me Through College
Simple Lunch Recipes 🥘👉 Lunch recipe for Healthy eating #shorts #ytshorts