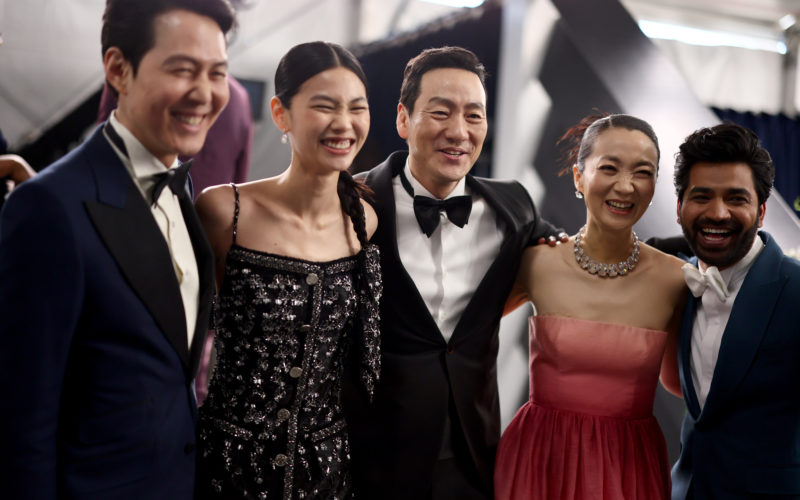 From Lady Gaga to HoYeon Jung, Selena Gomez and more.

Awards season is finally in full swing. After one too many virtual acceptance speeches and axed affairs, the 28th SAG Awards was a refreshing reentry to the red carpet. You want Jeremy Strong in a pink velvet tux? You got it! The cast of Squid Game cheesing for the cameras? Check. This event has it all!

The Screen Actors Guild returned to in-person pomp and pageantry Sunday (February 27) at The Barker Hangar in Santa Monica, California to celebrate the film and TV that defined 2021. A not-to-be-missed affair, the awards are a bellwether for the acting categories at the Oscars (to be held March 27) — and if Squid Game‘s loot is any indication of what’s to come, the South Korean drama may secure Netflix a few more accolades in the future.

Taking home awards for stunt ensemble in a TV series, male actor in a drama series (Lee Jung-Jae) and female actor in a drama series (HoYeon Jung), the cast has plenty to celebrate…including being among the best dressed actors to walk the SAG Awards red carpet, along with Lady Gaga, Selena Gomez, Cynthia Erivo, Carl Clemons-Hopkins and many others.

Scroll through the gallery below to see more of the best dressed celebs from the SAG Awards 2022 red carpet.

This article is being updated live.

Will Smith and Jada Pinkett-Smith

Now’s the Best Time to Buy Yourself Diamonds
President Biden Plans to End the COVID-19 Public Health Emergency; What Will Change?
All Your Day Needs Is This 10-Minute Latin-Inspired Dance Workout
Women Trying To Expose “Creepy Men” At The Gym
Should We Really Expect Honesty from Beauty Influencers?