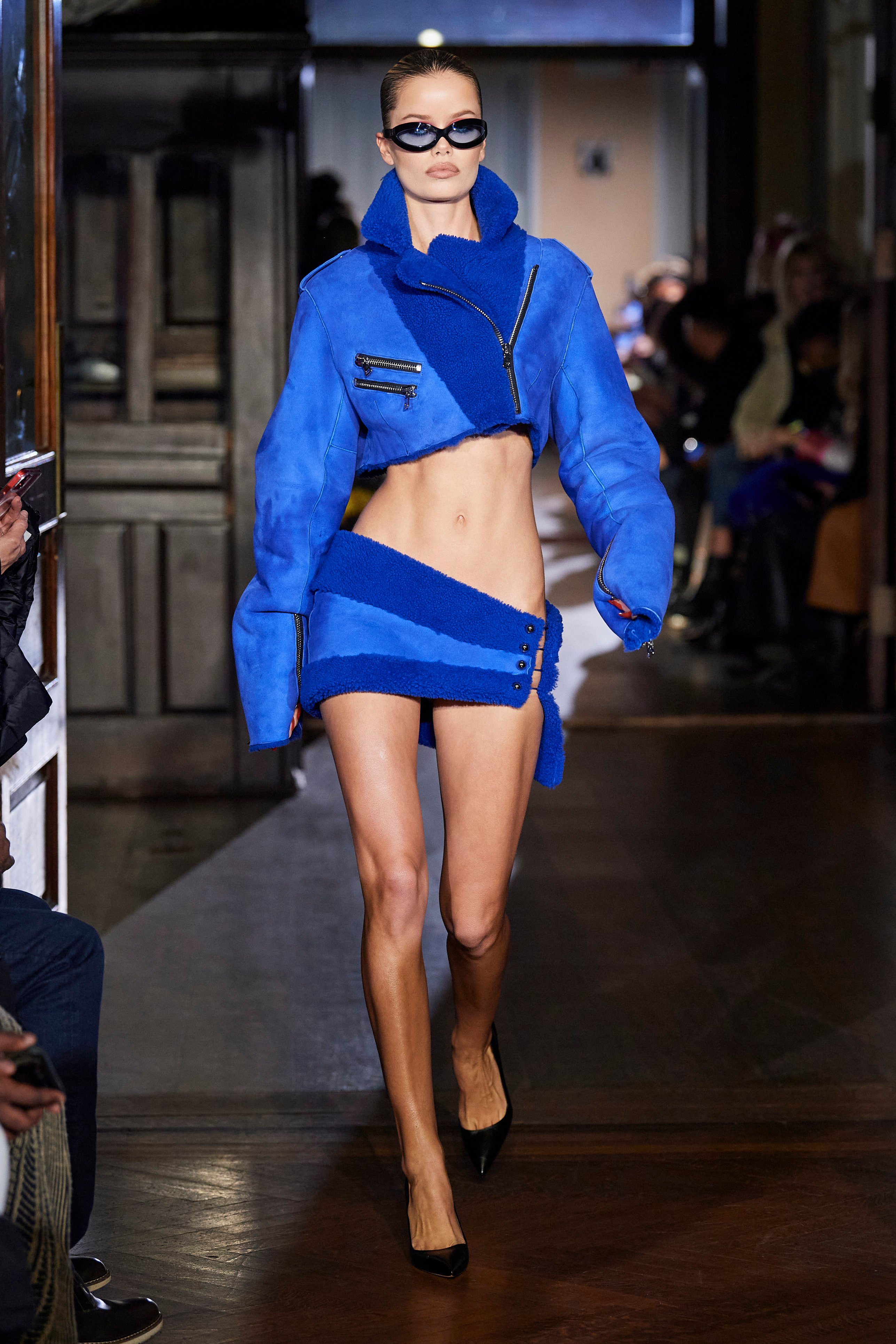 When leggy models strutted down the Miu Miu runway last October with belly buttons, hipbones and upper thighs on display, the Italian fashion house had marked the return of the low-rise, ultra-mini skirt.

After a summer of Y2K revivals (like the “whale tail” exposed thong and “coconut girl” aesthetic), Miuccia Prada’s presentation upped the ante for early 2000s nostalgia. But by tapping exclusively thin models to wear its skin baring line, the luxury label proved it was living in the past.

Over the past few months, models like Bella Hadid and Hailey Bieber have worn the ultra-mini skirt on casual outings, and the garment’s been praised as a symbol of fashion’s return to fun, experimental and risqué dressing. It only makes sense, then, that during New York Fashion Week Fall/Winter 2022, designers would tap into the mini skirt craze again by presenting their own takes on teeny, low-rise attire.

For his runway show, LaQuan Smith presented micro-mini skirts bound together by ties and what appeared to be safety pins. “This collection was really about the revival of New York City and celebrating life again,” the designer told Vogue. Australian label Dion Lee also presented a leather variation of the barely-there skirt, featuring nearly undone clasps. What remained the same was the waify models featured on the catwalk.

“To be blunt, it sends the message that plus-size people aren’t attractive/thin enough to wear cool clothes,” Monique Black, a model and fashion influencer, tells FASHION. “There’s no difference between a flat stomach and one with rolls other than how they’re perceived and categorized.”

First gaining popularity in the ‘60s, the miniskirt represented a rebellion against societal taboos. Born out of a youth-led movement that aimed to counter the repressed post-war fashion of the ‘50s, the mini skirt went on to become a cultural icon. In the 2000s, the leggy garment was further revised to be low-rise and even more scandalous.

But before that, in the ‘90s, the idealized fashion standard was “heroin-chic,” an aesthetic that celebrated thinness and paleness. This narrative continued into the early 2000s, when thin people were glorified as a necessary accessory to complete any high-fashion outfit. Needless to say, fatphobia and body shaming are inextricably linked to that period of time.

“Clothing options for plus-size people in the early 2000s were virtually non-existent, thereby completely excluding fat people from fashion,” explained model Jessica Blair in a TikTok video. “Low rise jeans are viewed as fashionable and trendy on thinner body types, but are typically seen as lazy or unflattering on plus-size bodies.”

Y2K fashion trends are cute, sure, but as we bring these styles back, it’s important to understand the social and cultural context in which they first thrived. Still today, thinness is viewed as something that complements a revealing outfit, while people with larger bodies are often criticized for wearing the very same pieces of clothing. As the micro-mini skirt returns to the catwalk, we’re leaving behind a key evolution in the world of fashion: body inclusivity.

But Black is ultimately happy about the ultra-mini skirt resurgence. Fashion’s larger trend of risqué dressing reminds her of the ‘60s, when women began to wear miniskirts as part of a radical societal shift. “Except this time,” she says, “we get to take that mantra and apply it to all body types.”

And while the body positivity movement has moved the needle in fashion, fatphobia still exists within the industry. With Y2K finding its way back into the style zeitgeist, it’s critical that we don’t regress to the body-shaming culture of the noughties. And that starts on the runway.

“It really goes back to representation,” Black says. “If we’re pulling inspirational pictures from the 2000s to recreate the looks, and all we have are thin, white women to look at, it sends the message that to wear these clothes, you must look this way.”