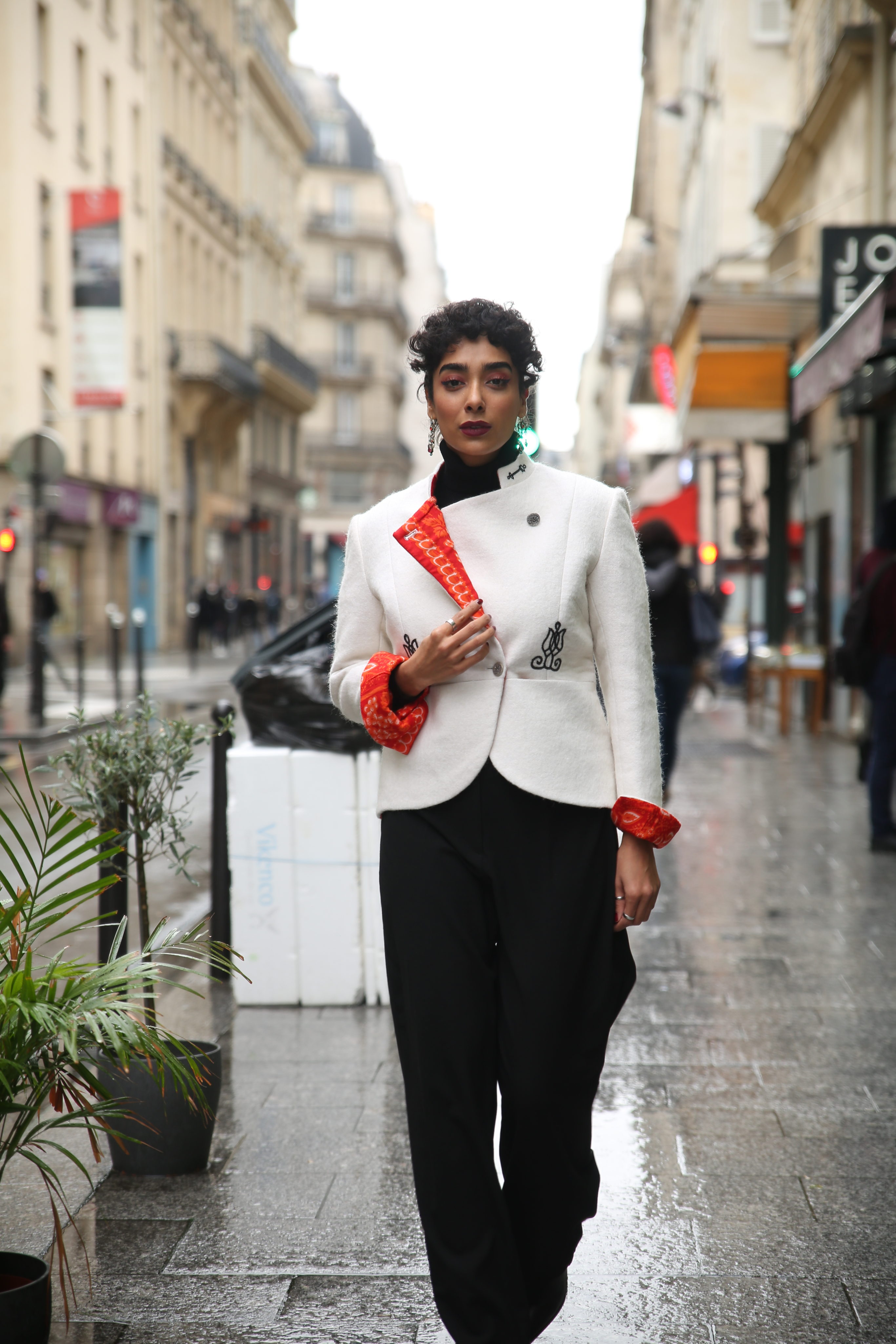 “Fashion, for me, is really the people behind the craftsmanship.”

Known for its vibrant colours, detailed embroidery and exquisite silk fabric, the traditional Afghan chapan, a long coat worn by many men in central Asia, is Afghan-American designer Zolaykha Sherzad’s bestseller. Sherzad, based in New York, founded Zarif Design in 2005. She works directly with local Afghan artisans in Kabul, designing pieces for both women and men that merge Afghan attire with a contemporary modern twist. Her work is applauded by many including French designer agnès b., performance artist Marina Abramović, and acclaimed New York Times bestselling author Dr. Deepak Chopra (here’s a picture of him wearing the signature waistcoat).

For Sherzad, Zarif Design is more than just fashion — it’s fashion with a purpose. It’s a deep-rooted desire to help her fellow Afghans economically while creating pieces that embrace authentic Afghan craftsmanship. But in August, after 16 years of effort, investments and sacrifices evaporated in a matter of hours as the Taliban came back into power.

During the first Taliban regime, which began in 1996, women virtually disappeared from the public eye. They were banned from working and were not allowed to travel without a male guardian. The violation of these rules resulted in severe punishment.

That all changed for the better when the Taliban were overthrown in 2001, inspiring Sherzad to help Afghan artisans apply their skills in an industry that would allow them to grow and take advantage of economic prosperity that had been previously inaccessible (in fact, some of the female workers in her Kabul workshop are the primary breadwinners for their families). But two decades later, in the aftermath of the Taliban’s resurgence, Sherzad’s main concern is her team back in Afghanistan.

“The first month everything was just upside down. Emotionally too,” Sherzad says. “Nobody knew what was going to happen…everything just stopped… I worry about how long I can help these people get through this challenging time, and hope that things will soon change.”

Prior to August 2021, the team consisted of 52 weavers, tailors and embroiderers. Within months that group fell apart as some members fled the country and others are now too afraid to work. Production has significantly slowed down and Sherzad is no longer able to export pieces from Kabul. To keep spirits alive despite the situation, Sherzad assigned some of her team members to focus their efforts instead on intricate embroidery, which generally takes longer to create.“I wanted to give them something that they would enjoy during the day, from tailoring to embroidery,” Sherzad says. “So that when they see those pieces they feel a sense of accomplishment.”

Sherzad sources all of her fabrics from Afghanistan, including the impeccably detailed handmade embroidery. She also employs and trains Afghan women and men to practice “slow production” in the form of hand-crafted work and detailing. Slow production, also known as slow fashion, is the approach of producing clothing that takes into consideration all aspects of the supply chain. It means spending more time on the design process to ensure that each garment is of high-quality. It’s the opposite of what we consider fast fashion, in which the clothing quality is cheap, mass-produced and the environment and employees are exploited. Instead, at Zarif Design, tailors, seamstresses, embroiderers and weavers are given a place to train and master their skills to preserve cultural designs.

“What I love is that we are all interconnected, no one is doing anything alone,” Sherzad says. “The purpose of this project was not just the jacket itself. It’s how the jacket comes together.”

In addition to the brand’s signature jackets, Zarif Design also produces modest and gender inclusive unisex pieces. “It’s more about the character of who you are, so therefore gender is not something that pushes my design,” Sherzad explains, “It’s the fabrics, the flow, the details, the shapes, and the sense of freedom.”

Take for example the signature waistcoat. Although the waistcoat is listed separately for both men and women, the design is almost identical. The straight lines, silk trim detail and hand-made buttons (replica of antique coins) give off an adrogynous feel. In fact, some of her fashion inspiration comes from Japanese-based designer Yohji Yamamoto who, similar to Sherzad, creates timeless androgynous pieces. “I don’t follow the seasons, I don’t believe in that,” says Sherzad, who actually lived in Japan for little over a year. “Yamamoto is a designer that I really respect for how much he has been able to carry the essence of the culture, the tradition and connecting the times.”

Sherzad is doing exactly that — carrying the essence of the Afghan culture and tradition in a timeless manner. The one of a kind signature jackets, traditionally worn by men, are recreated in a modern way for women while still staying true to traditional design. The jackets come in red, navy, and in multi-colours and are all handwoven. “It’s all connected to the past,” Sherzad says, “I was using some of those traditional fabrics and cutting them in a certain way and it became very modern, so there was this juxtaposition between past and present.”

In New York, Sherzad is currently setting up pop-up shops to help sell some of the garments. For further exposure, The Chopra Foundation, led by Dr. Deepak Chopra, set-up a GoFundMe page to donate money to send emergency relief to artisans and their families in Afghanistan. The page has already raised a quarter of its $100,000 goal.

While the future of Zarif Design is unclear, Sherzad continues to use her platform to ensure that the brand continues to inspire, and empower Afghan communities.

“Fashion, for me, is really the people behind the craftsmanship,” Sherzad says. “It is the artisans that really matter the most.”