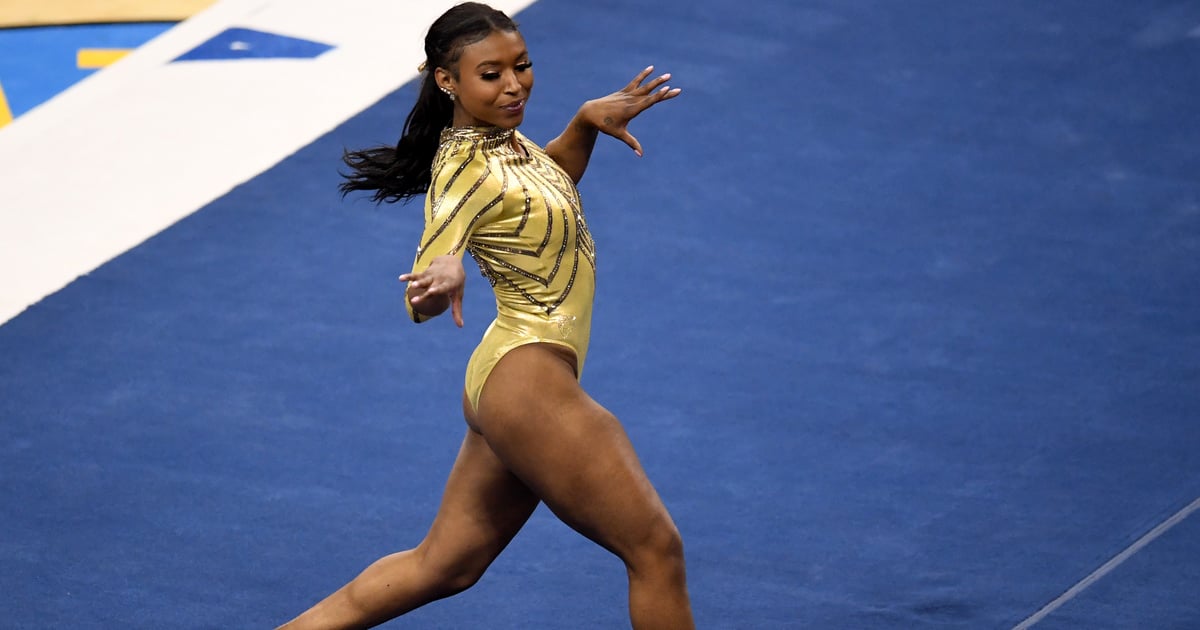 When Nia Dennis graduated from UCLA last spring, she knew she still had some gymnastics opportunities ahead of her, namely the Gold Over America Tour with a rockstar roster of world-class gymnasts, many of whom she grew up competing against. There was also an electric, flip-filled appearance on the 2021 Met Gala steps (no big deal). But she’s looking to branch out and discover what it means to be “NiaNation” beyond her sport.

While she says a career in the gymnastics realm is always a great plan to fall back on — she still coaches summer camps — Dennis told POPSUGAR in early January, “I definitely want to see what else I can bring to the table, and I think that this year is a year for me to explore.” She has a degree in sociology, which she won’t put to use just yet. For now, she’s pursuing opportunities in the entertainment space like modeling, dancing, and stunt doubling. A handful of UCLA gymnasts who came before her are stunt doubles (Sadiqua Bynum, Natalie Padilla, and Kiralee Hayashi, for instance), and she notes she’d love to do stunts for a franchise such as the Marvel superhero films.

Dennis tumbled in a Dick’s Sporting Goods commercial post graduation and most recently partnered with Pressed and Nair. She couldn’t reveal specifics about upcoming opportunities, though she did note that one deal she has in the works goes along with her mission of authenticity and empowering young women and girls.

Dennis says she was encouraged to find her authentic self during her four years at UCLA (2018-2021) thanks to former Bruins head coach Valorie Kondos Field (“Miss Val”). Dennis learned to love herself and her sport again after she missed the Rio Olympics — a dream of hers she strived toward for 17 years — due to a torn achilles. It was one of the darkest points of her career, and Miss Val helped her reclaim the joy she once had in the sport.

“Growing up, I struggled with identity and wanting to change the color of my skin and wanting to fit in with my environment and wanting to fit in with people around me,” Dennis says, recalling times when her childhood teammates would make fun of her hair texture or the fact that the chalk they’d use on bars and other events would show up “brighter” on her skin. Kondos Field, she says, would celebrate the athletes’ differences “as opposed to what I was used to, which was criticizing our differences and bullying and making fun of people’s differences.”

Kondos Field retired in 2019, and Chris Waller was promoted from associate head coach to fill her role. Waller and UCLA leadership are currently coming under fire due to reported failure to address racist incidents within the team. A freshman allegedly used racial slurs and made inappropriate comments in front of teammates, which some members of the team felt coaches, Waller included, did not handle appropriately. The gymnast has since transferred to LSU.

Dennis said in a followup call when news began surfacing online that she doesn’t feel comfortable speaking on the matter. However, the sense of self she garnered as a collegiate gymnast — the unmatched personality and pride she displayed in her wildly-viral floor performances — continues to drive her forward. “Once you are authentically you, it’s really hard to go back,” she says.

Dennis was among a class of athletes eligible for an extra year due to COVID-19, but she had already planned to close that NCAA chapter. While it was a tough decision to make, she had her mind set. “I definitely do feel like it is time to move on and find my other passions and find a what else is fulfilling to me,” she says.

Having recently moved to a new apartment, Dennis is getting settled into the “real world.” She notes, “My whole life has been a routine, and it’s been spelled out for me.” Now she’ll forge a different path all her own.