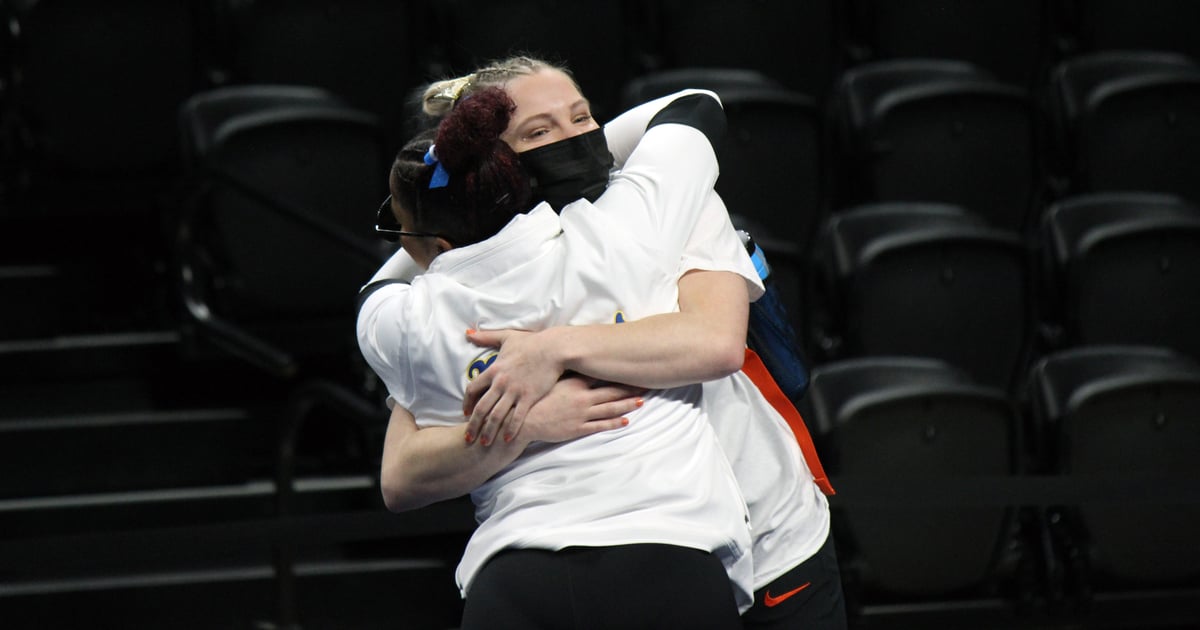 Gymnasts Jordan Chiles and Jade Carey competed together at the Tokyo Olympics — Chiles was part of the four-woman American squad that earned silver in the artistic gymnastics team competition, while Carey claimed floor gold as one of two individual athletes on the women’s side repping the US. They both showcased their talent at the star-studded Gold Over America Tour this past fall. Then, on Sunday, Jan. 23, they reunited when Chiles’s UCLA, Carey’s Oregon State University, and UC Davis went head-to-head in NCAA gymnastics.

Oregon State defeated UCLA and UC Davis, and along the way, Carey broke the all-around record for her school’s women’s gymnastics program with a score of 39.800, racking up two near-perfect 9.975s on beam and floor. According to Oregon State, Carey’s all-around mark is the nation’s highest so far this season. Meanwhile, Chiles also flirted with perfection, earning a 9.925 for her bar routine.

While the two are rookies to the collegiate side of the sport, they’re pros when it comes to cheering each other on: an excited Chiles could be seen rooting for Carey on floor during the meet’s live broadcast. When asked about it, Chiles said, “[Carey’s] done such an amazing job. Ever since the day I first met her, she’s been out there shining.” Chiles added, “I needed to go out there and support her in that way like I did in Tokyo because . . . she’s a boss!”

Ahead, check out more from the Olympians’ reunion, as well as Chiles’s stellar bar performance and Carey’s high-scoring floor routine. They may be freshmen, but they sure know how to bring their A-game to the NCAA.

30+ Black-Run Beauty Businesses to Shop Year-Round
All Your Day Needs Is This 10-Minute Latin-Inspired Dance Workout
Beginner Pilates Wall Workout Plan
8 MIN LEG WORKOUT – with Lucas & Steve / Level: Beginner – Medium, or use it as a Warm Up
20 MIN TONE IT UP Total Body Workout | Quick No Repeat HIIT