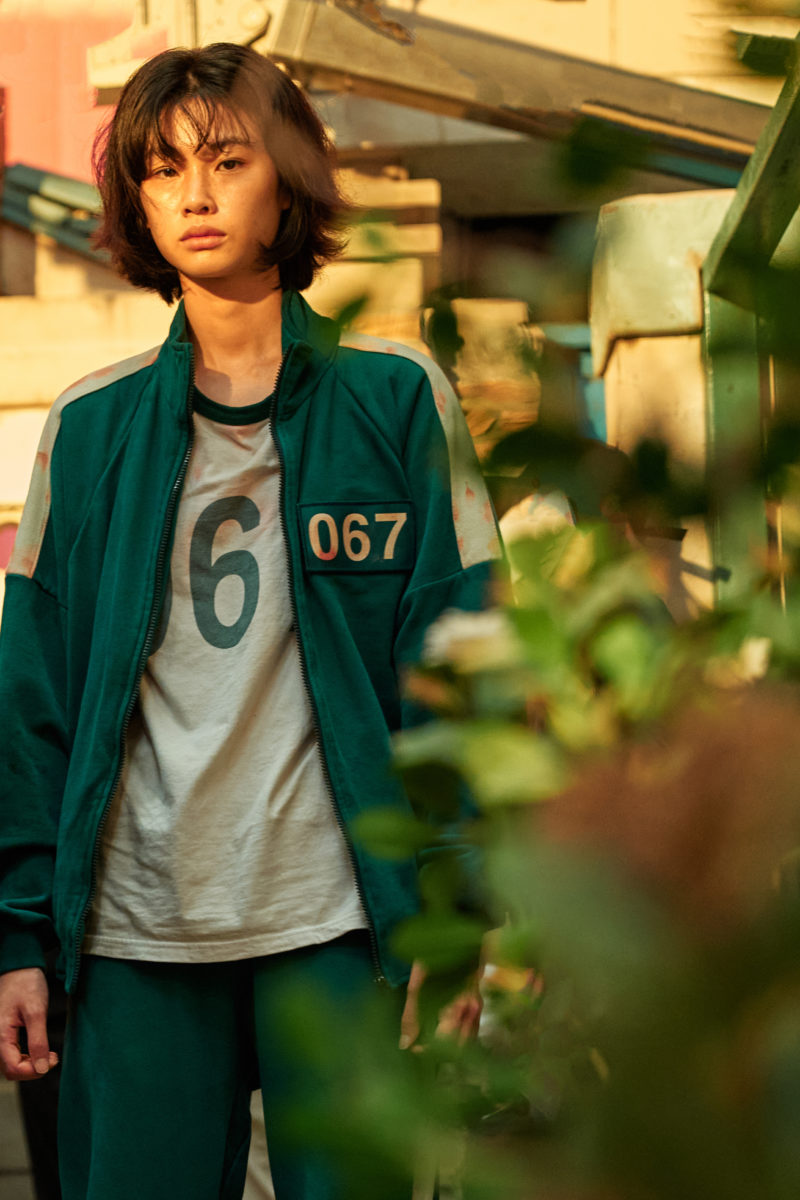 And all fashion and media collabs, for that matter.

There’s a distinctive joy in reliving the excitement of a piece of media — be it a film, series or video game — in the clothing you wear.

Netflix gets this, having struck fashionable partnerships with fan-favourite series like Bridgerton and Emily in Paris. Its newest is a collaboration is between Japanese streetwear clothing brand A Bathing Ape (BAPE) and the streamer’s most-viewed show to date, Squid Game.

The dystopian series, which premiered in September 2021, follows a group of debt-ridden characters who, out of desperation, enter a seemingly harmless competition with a simple premise: play traditional children’s games for the chance to win a cash prize. But after a game of Statues, the players learn that there can only be one winner, and all those who eliminated from the game are murdered — it’s really graphic, FYI.

BAPE collection’s (not yet available in Canada) comprises three basic T-shirts with various graphic designs inspired by the show, including the famous numbers that the contestants must wear to self-identify — suffice to say, it was a let down.

Months after Squid Game‘s release, the series momentum on social media hasn’t quite tailed off. Since the recent announcement of the clothing collaboration, searches for “Squid Game fashion” have risen 163 per cent, according to fashion marketplace Love the Sales.

Even still, BAPE’s simple T-shirt designs received a mixed response online, with some accusing the collection of lacking creativity. Meanwhile, other recent collaborations between clothing brands and popular media have found viral success with designs that essentially copy and paste imagery.

For instance, Spanish luxury brand Loewe launched a collaboration with the Studio Ghibli film Spirited Away on January 7. Since Netflix Canada added 20 films from the legendary animation studio to its library in 2020, its films have garnered a newly revitalized fanbase. Loewe’s collection taps into that by taking beloved imagery from the 2001 film and transferring it onto clothing and accessories.

Spirited Away follows a 10-year-old girl who enters a whimsical world of Japanese spirits to save her parents from a curse. The clothing collection captures the film’s playful aesthetic, with hoodies, T-shirts, bags and accessories that mostly feature various characters’ faces.

A similar strategy was used for the collaboration between Heaven by Marc Jacobs and Sofia Coppola’s classic 1999 film The Virgin Suicides. Set in the 1970s, the dark film explores the ennui and sadness among a group of sheltered teenage sisters.

The collaboration, which launched in October 2021, tapped into the film’s dreamy visuals and featured stills of the movie’s lead Kirsten Dunst splashed across T-shirts, skirts, button-ups, hoodies and bags.

Clothing collections that plaster imagery from popular film and television are likely to be divisive. Inevitably, these pieces can be interpreted as a cash grab cop-out design, or a genuine ode to the most popular imagery of our time.

Though much newer than The Virgin Suicides and Spirited Away, Squid Game’s poignant messaging about class inequality has already made it a widely agreed-upon classic. Creating a clothing line based on popular media with a strong legacy is difficult and will almost always garner conflicting opinions.

BAPE’s upcoming line is not the first clothing collection inspired by the show, and it won’t be the last. Going forward, should we expect similar copy and paste designs, or more daring, creative takes on the world-famous series?

OVERCOMING PAIN 🥺 FEMALE FITNESS MOTIVATION
Want to See My Workout Plan as a Women’s Health and Fitness Coach? 🤔
12 min UPPER BODY RESISTANCE BAND Workout (At Home)
Is Schiaparelli Glorifying Trophy Hunting or Making Art?
What I Eat In A Day | I lost 135 Pounds with these meals!