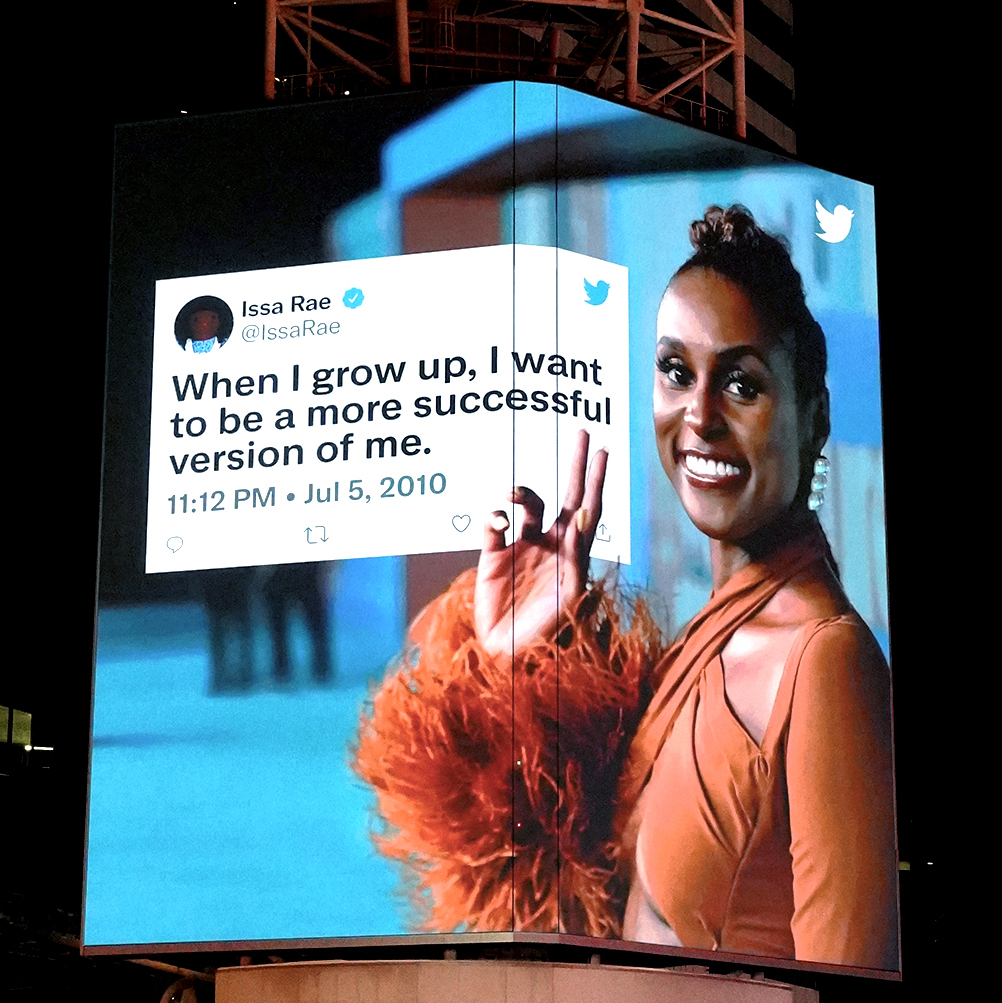 “When I grow up, I want to be a more successful version of me,” 25-year-old Issa Rae tweeted in 2010. Over a decade later, that same tweet is flooded with responses from fans assuring the Insecure star that she did, indeed, grow up to find success.

Rae’s tweet and others like it point to a larger phenomenon of speaking your dreams into reality, also known as manifestation.

Manifesting comes from an ancient principle called “Law of Attraction,” which states that by focusing on your goals and thinking positively, you can essentially wish into existence the life you want. On social media, the practice of aspirational thinking has never been more popular.

According to Twitter, posts about manifestation on the platform are at an all-time high. On Instagram, vision boards filled with aspirational photos land on our explore pages, while the hashtags #2022manifestations and #manifestations have 1.3 million views and 65.9 millions views on TikTok, respectively.

To mark the new age of digital manifestation, Twitter has launched a celebrity-powered campaign that highlights the success of different stars who tweeted about their dreams years before they came true. Old tweets from celebs including Simu Liu, Demi Lovato, Megan Thee Stallion and Niall Horan are displayed on billboards across North America.

Jennifer Bairos Hofer, head of marketing at Twitter Canada, says she thinks the rise in social media manifestation is part of a growing movement for people to live more intentionally. “There are elements of this offline too but on Twitter, we can see clear conversation trends that suggest people are being more focused and increasingly transparent in what their goals are and what they want to achieve,” she says.

Manifestation has its success stories — hence the aforementioned celebrity-packed campaign — but the practice has exploded as part of a broader social media wellness craze in recent years.

In 2020, at the onset of the pandemic that sent much of the world into isolation, a popular meme emerged: “Shut up, I’m manifesting.” The practice helped some feel in control at a time when the future was uncertain. Two years into the pandemic, that uncertainty might have waned some, but manifestation remains as popular (and accessible) as ever, as people take to social media to share knowledge and discuss different techniques.

For instance, opening up about your ambitions can invite encouragement and inspiration, but on the other hand, you might face doubt and unwanted external influence. TikTok creator @padmini recently shared her practice of  “moving quietly.”

“When I do speak [a dream of mine] into existence like that, I feel like I’m sort of asking for permission and validation in a very subconscious way,” she says. “And every time I do it, it sort of eats away at this confidence that I had at one point and the trust that I had in my gut that this is something that I want to do and pursue.”

And while it’s inspiring to see how far these celebrities have come, it’s also helpful to be aware of the outside influences that can cloud our aspirations when we share them with the world. Whether we post our goals to social media or write them in a private journal, positive thinking and self-assurance are powerful tools for success.

The best manifestation tip? Believe that whatever you want is already yours.