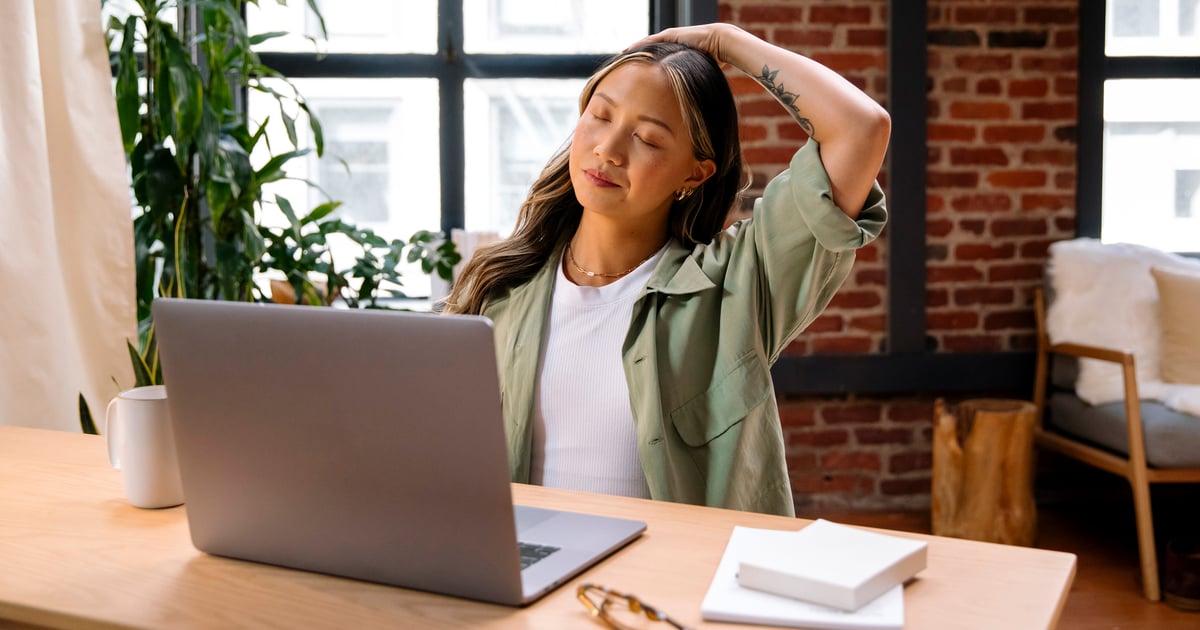 Moving to move instead of moving to work out is the core of the Calm app‘s Daily Move video series. Incorporating physical wellness into Calm’s library of star-studded sleep stories and meditations, Daily Move is a collection of sessions — all around five minutes long — taught by dancer and yoga instructor Mel Mah. Her soothing voice, neutral-toned environment, and soothing backtracks combine to create a playful space where users are encouraged to deepen their personal movement practice.

Available on both Apple and Android devices through Calm’s app, new sessions are released every day. After trying all the current Daily Move sessions over the course of a week, there were three that I’ll be returning to often.

Releasing Stress starts by swinging the arms like a pendulum while bending and straightening the legs, which helped open up my shoulders. When I’m stressed out my shoulders get so tense they nearly touch my earlobes, so this motion was a great beginning. Next, we moved through variations of Forward Fold. As we were moving, Mah said, “Let go of the need to do this right.” I let out a sigh of relief that could be heard across the globe.

With a soothing atmospheric background track playing, this entire session felt like I was moving all of the stress in my brain and body out. Toward the end, we placed our hands over our face, ears, and heart. Each spot unlocked another layer of relaxation as we paid attention to it.

On a frustrating afternoon I tried the Saying Goodbye to Anger session. We began by moving the anger out of our bodies. Standing in a wide squat called Horse Stance, we punched with one fist then the other on every exhale. I envisioned the source of my anger in front of me which made those punches feel even more satisfying. We then sat down for Lion’s Breath, where you take a big exhale while sticking out your tongue. Taking this breath while hinging at our hips felt like we were heaving the rage up and out of our bodies.

With all of the anger out, we took a grounding Child’s Pose, which felt so needed to let everything settle. At the end of the session I felt like all the anger and the frustration were purged so that I could move through the remainder of my day effectively.

Moving For Fun brought me back to the modern dance classes I used to take in college where we were told to move intuitively using different prompts. The first prompt Mah offered was to think of a picture and envision that the top of our heads have paint. She told us to draw the picture using the top of our heads. My initial image was a mountain, but after I drew mountains I decided to add some trees and a sunset so I could move a bit more. Next, we spelled our names with our bodies. At first I pondered what part of my body I should use.

I then realized that I could use multiple body parts at the same time. Using fingers, toes, my booty, I was moving like the inflatable tubes at a car dealership. Finally we we’re told to move like our 5-year-old selves. For me, I sat down and moved intuitively on the ground since that’s that I remember doing a lot of at that age. By the end I felt so much more energized, and I deeply resonated with Mah’s closing statement, “We grow old because we stop playing.”

I appreciate that in a short amount of time I’m able to play, release tension, and de-stress through each of the Daily Move sessions. Even through movement, Calm stays true to its name by providing a relaxing environment for users. If you’d like to try Calm’s Daily Move series, check out Calm’s website.